At the conference ‘ISIS in Europe’ [1] a panel of scholars and security experts tackled the interlinked issues of jihadi radicalization and terrorism in Europe from both a sociological and security perspective. The conference attempted to examine the reasons why Europeans engage in violence inspired by a jihadist narrative, whether at home or abroad, and how state security agencies can better cooperate and coordinate their actions to counter the recruitment of these Europeans into groups such as ISIS.

Source: Dabiq, magazine of the Islamic State in English.

TRENDS Research & Advisory, a research and advisory centre based in Abu Dhabi, and the International Centre for the Study of Radicalization and Political Violence (ICSR), a think tank headed by professor of security studies Peter Neumann, convened the conference at King’s College London on 28 and 29 July 2016.

The timing of the conference was not accidental. In recent months we have seen a steady increase in the number of ISIS-inspired violent attacks in Europe, mostly perpetrated by supposedly ‘lone wolves’ – or small groups – claiming allegiance to ISIS. On 14 July a Tunisian living in France killed over 80 and wounded hundreds by driving a truck through a crowd in the French city of Nice. On 24 July a Syrian who had been denied refugee status in 2015 killed himself and injured 15 others by setting off an explosive device outside a music festival in the German city of Ansbach – marking the first suicide attack purportedly linked to ISIS on German soil. On 26 July two attackers slit the throat of an 84-year-old Catholic priest in a church in a suburb of the French city of Rouen. To quote one of the panellist: ‘It seems we are in for the long haul.’

The ICSR event was divided into four panels of experts who discussed ISIS as an organization, its online presence, and the state of research on this ‘fourth wave’ of militant jihadism in Europe and beyond.

Ambassador Alberto Fernandez, vice president of the Middle East Media Research Institute and a former US Foreign Service officer, started the first discussion by focusing on ISIS as a revolutionary chameleon that is able to attract a large variety of potential recruits, ranging from the petty criminal, to the identity seeker, to the romantic.

This diagnosis was shared by Shiraz Maher, deputy director of the ICSR, who highlighted several key aspects of ISIS, most notably its shift from the highly theoretical narrative produced by al-Qaeda to the more ‘physical’ and ‘ordinary’ narrative of the new Caliphate. The latter offers a type of experience that is able to exercise an uncanny power of mobilization among a significantly large constituency whose members are not attracted by complex doctrine, but rather by a narrative of utopia and redemption.

While being sceptical about the term ‘radicalization’, which was coined in 2004, Rik Coolsaet (Ghent University) described the profile of the violent European jihadis as very young (with an average age of 20 to 24 in Belgium), with a criminal record (a key characteristic of all European jihadis), usually devoid of any religious knowledge or Salafist affiliation, and displaying narcissistic tendencies. Two main groups can be identified: the urban delinquent who sees ISIS as a kind of super-gang, and a blend of individuals with no criminal record who are driven by a ‘no future’ jihadi subculture – a concept that might be more useful than that of ‘radicalization’, suggested Coolsaet.

Professor Farhad Khosrokhavar (EHESS, Paris) extended this profile by adding that we might be witnessing the emergence of a new type of terrorist suffering from mental health issues: a substantial number of attackers have been diagnosed with depression, seem to have a very loose relation with ISIS and might be following a mimetic pattern rather than being mobilized within a broad strategy.

Lorenzo Vidino, director of the Program on Extremism at George Washington University’s Center for Cyber and Homeland Security, tackled the question of why Italy has produced so few foreign fighters (110 foreign fighters originating from Italy have been identified, among whom only 12 to 15 hold Italian citizenship), even though 20 years ago Milan was the gateway to joining the jihadist movement in Bosnia. The first suicide bombing attributed to jihadists in the war in the former Yugoslavia was carried out on 20 October 1995 in Rijeka, Croatia, by a militant from Italy. Vidino proposed three complementary hypotheses in explanation: firstly, immigration to Italy from predominantly Muslim countries is a more recent phenomenon than in France or Belgium. Italy has, therefore, not yet produced a second generation of young Muslims, who are the most common recruitment pool for the new jihadist wave. Secondly, he suggested that although Italy has very poor integration policies and arguably represents a relatively difficult place for new Muslim migrants, relative inequality has not been a significant motivating factor in recruitment into ISIS and affiliated groups in Europe. Thirdly, Italy has especially efficient and experienced intelligence and police forces, whose skills were honed during sustained campaigns against the Red Brigade and who have the power to quickly deport non-citizens identified as a threat (since the beginning of 2015 Italy has deported an average of two non-citizens per week on national security grounds).

According to Professor Fernando Reinares, director of the Global Terrorism Programme at the Elcano Royal Institute, Spain has a relatively similar situation to Italy in terms of the generational dimension of the phenomenon. The majority of the jihadists arrested in Spain are married and have an average of two children; their unemployment rate is on a par with that of young Spanish citizens; 85% have only a very rudimentary knowledge of sharia or the Qu’ran; and the vast majority were radicalized offline, usually through an agent, a charismatic figure or a former foreign fighter. Only 5% could perhaps be construed as ‘lone wolves’. 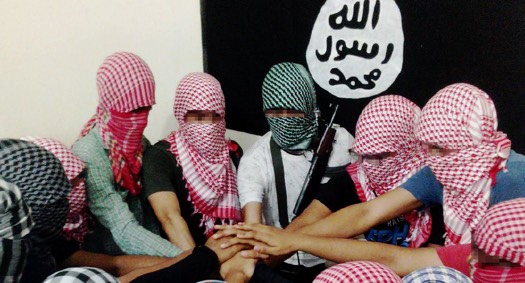 Pledging allegiance to the Caliph (source: Dabiq, magazine of the Islamic State in English).

Denmark appears to be a kind of paradox, according to journalist and researcher Jakob Sheikh, who claimed that while there is indeed a large pool of potential and actual recruits to ISIS and its affiliates in Denmark, no major attack has yet occurred in the country. Sheikh hinted that this may be the result of the so-called ‘Aarhus model’: a model of prevention and rehabilitation for ‘wannabe jihadists’ and returnees (i.e. individuals who have left ISIS after training or fighting with the group overseas), which involves the collaborative effort of social workers, municipal police, and mentors to help the recipient to realign his ideological trajectory and rebuild his life. So far, only 30 Danes have graduated from this innovative programme, but one remains hopeful of its success. Approximately 80% of Danish foreign fighters with ISIS were found to have been mobilized through organized groups; this includes women, whose numbers travelling to Syria have recently surged.

This socialization into the group and the attendant rise in female recruits has also been observed in Germany, according to Daniel Heinke, a professor of criminal law and terrorism studies at the University of Applied Sciences in Bremen. According to Heinke, Germany’s experience shows that prohibiting an organization from gathering in a manner conducive to the formation of social bonds or disrupting key relationships to enable a severing of these bonds may lead to the effective reduction of individuals radicalizing in a specific location.

Sheikh noted that most Danish recruits came from liberal and secular low-to-middle-class families, which confirms that the degree of recruits’ religious practice and their relative integration into a broader secular system have a negligible impact on the propensity of a potential recruit to join the group. In short, given sustained European radicalization and recruitment into ISIS, despite the diversity and variance in integration policies throughout the continent, the panel agreed that there is no causal relationship between integration and radicalization. Professor Reinares added that in our examination of the causes of radicalization, we sometimes tend to put too great a focus on societal discrimination and state policies that may cause disaffection, while ignoring dysfunctions within some Muslim communities that can result in Salafist-style seclusion and alienation/exclusion from the broader societies in which they live.

All the panellists recognized the impact of ISIS’s online presence and concerted media effort. Alberto Fernandez indicated that while ISIS’s virtual footprint remains larger than any of its competitors or forerunners, it is nevertheless gradually shrinking. Materials posted online by the official ISIS media wing now have a relatively short life expectancy, with the multitude of platforms routinely used by the group to both collect and disseminate propaganda being steadily closed down by law enforcement and military efforts. Between November 2015 and July 2016, ISIS’s media output fell from an average of 62 to 21 items a day, according to independent researcher Charlie Winter. Complex by design, ISIS’s online ecosystem aims at propagating the group’s narrative, legitimizing its actions and intimidating its enemies. According to Winter’s analysis, the group’s key strength is its ability to innovate on both the tactical and strategic levels. ISIS recognizes that the media war is as important as its physical victories in Syria and Iraq, and by prioritizing the need for effective marketing and public relations, ISIS makes careful efforts to continuously calibrate the material it publishes in accordance with its successes and failures in order to better mobilize its audience. It often tests new ideas and motifs that accompany its narratives and encourages flexibility and creativity within its propaganda branches, at times even downplaying its key ideological focus on utopian and victim-based narratives when it feels that this is strategically appropriate.

Researcher Aymen Jawad al-Tamimi provided a rare insight into the motivations for ISIS internal dissent. While ISIS has proved itself capable of absorbing opposition groups after successful military campaigns, it does occasionally suffer from internal fissures, usually resulting from conflict between key personalities in its leadership. Examples include the occasion when several ‘rogue’ members took to the internet to declare the apostasy of ISIS’s official spokesperson, Abu Muhammad al-Adnani, and then proceeded to claim that the group’s new caliph, Abu Bakr al-Baghdadi, was also apostate. An elderly member well connected with the group’s leadership, Abu al-Faruq al-Masri, went so far as to distribute a pamphlet in Raqqa criticizing not only the group’s failure to take Aleppo and declare it the capital of the Caliphate, but also what he saw as Baghdadi’s ill-advised enthusiasm for recognizing too many ‘provinces’ across the Middle East, stating that his attempts to wage war in all corners of the globe was a mistake. Al-Masri has since disappeared.