As economists and world leaders look for an alternative to the current economic system, which they believe caused the 2008 global financial crisis among other disasters, the tiny kingdom of Bhutan is pitching for a Buddhist approach to economics citing concerns beyond a country’s financial health. 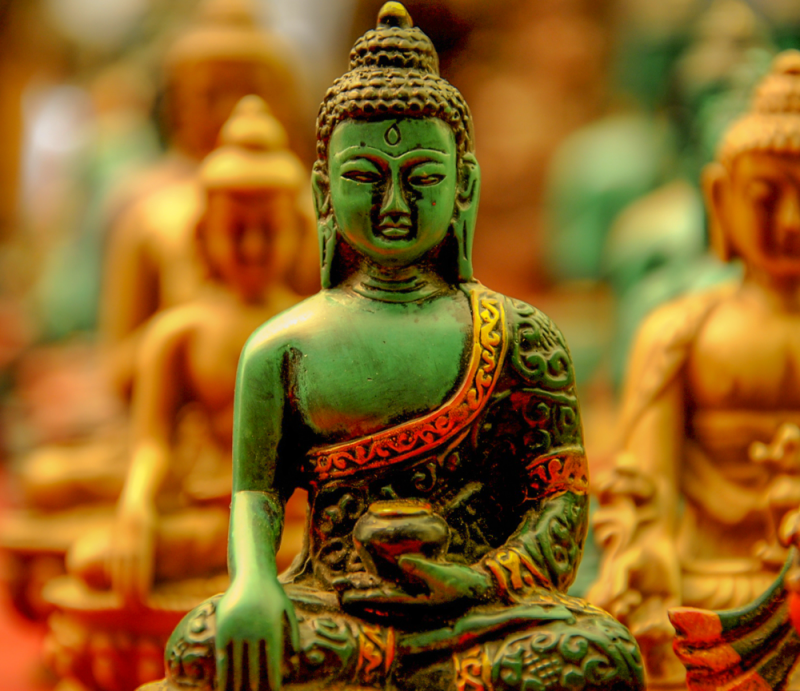 The Constitution of Bhutan gives a special status to Mahayana Buddhism, while recognizing religious freedom of its citizens (© 2016 Vishal Arora).

Economists’ main object of criticism is Bretton Woods system, which was based on an agreement reached among 44 allied nations in the midst of World War II in 1944 to bring in stability and peace. It established the rules for commercial and financial relations among the world’s major industrial states at the time and led to the establishment of the World Bank and the International Monetary Fund. It also cemented the use of gross domestic product, or GDP, as a key measure of economic progress, and resulted in a so-called ‘Golden Age’ of capitalism.

The ongoing mainstream debate currently seems to be moving towards what was proposed at the 1944 conference in Bretton Woods in New Hampshire in the United States by British economist John Maynard Keynes, whose views differed from those of his American counter-part Dexter White. Keynes’ proposal was to set up a world central bank which could issue its own currency to help reflate the world economy by expanding the money supply, among other things. The proposal was shot down by the United States at the time.

Going back to Keynes’ would only be like “pouring new wine into old wineskins,” warns Bhutan, the world’s only Mahayana Buddhist country. This nation of a little more than 750,000 people is calling instead for a paradigm shift, challenging the very basis of the Western understanding of economics.

Since it introduced democracy in 2008, Bhutan has been urging the world to consider emulating its unique economic policy, which shuns GDP growth as a measure of economic growth. In 2011, a UN General Assembly resolution empowered Bhutan’s then Prime Minister Jigmi Y. Thinley to formally speak to representatives of member countries about the need to adopt happiness as a key economic goal. 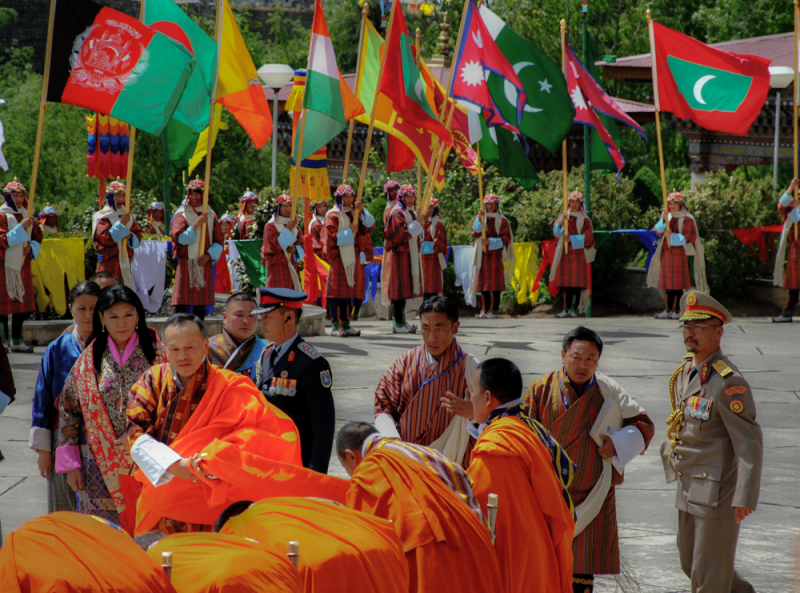 Bhutan’s former Prime Minister Jigmi Y. Thinley promoted GNH across the world during while holding the office from 2008 to 2013 (© 2016 Vishal Arora).

Bhutan is the only country in the world that measures its progress in term of “gross national happiness,” or GNH, as opposed to GDP.

The pursuit of happiness, as the term is commonly understood, is universal, but the word “happiness” in GNH refers to the holistic wellbeing of citizens, conservation of environment and preservation of culture, rather than an individual’s “emotional” state. Bhutan’s incumbent Prime Minister Tshering Tobgay explained it at a recent Ted Talk. He said, “Our enlightened monarchs have worked tirelessly to develop our country, balancing economic growth carefully with social development, environmental sustainability and cultural preservation, all within the framework of good governance.”

The term GNH was coined in the 1970s by Bhutan’s fourth king, who famously pronounced that for his country, Gross National Happiness was more important than Gross National Product.

GNH, which resists laissez-faire development, has four pillars or considerations – sustainable development, preservation of culture, environmental conservation and good governance – to balance the material and the spiritual. Both government policy and business proposals in Bhutan are evaluated on the basis of their likely impact on these four areas.

While GNH is based on the Buddhist concept of the “Middle Path” between indulgence and asceticism, Bhutan appears to be shying away from officially acknowledging the link lest this concept is seen as irrelevant to non-Buddhist countries.

GNH entails a periodical survey, called the GNH index, to quantify the level of happiness among the citizens. It also seeks to measure the respondents’ spiritual levels, and asks questions about meditation, forgiveness and compassionate. It includes the question whether they take into account the effect of karma in their daily lives.

In an April 2013 interview, Dr Saamdu Chetri, Secretary and Executive Director of Bhutan’s GNH Centre, whose purpose is “to demonstrate and put into living practice the philosophy of Gross National Happiness,” acknowledged the link between Buddhism and GNH. He said, “‘Right livelihood’ (an important aspect of the Buddha’s Noble Eightfold Path) and GNH are very related,” and referred to a degree in “Right Livelihood” offered by the Schumacher College in the United Kingdom. The college is named after economic thinker E.F. Schumacher, who coined the term “Buddhist economics.”

“Without ‘interconnectedness,’ (an important concept in Buddhist doctrines) there is no GNH in fact,” he added. He also admitted that GNH “is directly connected with Buddhism,” but while arguing that Buddhist principles are universal in nature and therefore GNH is relevant to the world.

Dasho Karma Ura, President of the Centre for Bhutan Studies and who is credited with quantifying happiness for the GNH policy, has said that “GNH should be considered as a Buddhist society’s equivalent of the social contract, where citizens pursue collective happiness.” He added, “To be a member of a GNH society requires one fundamental property: to see all things as interdependent with all other things. By being convinced and informed about interdependence, compassion should naturally arise as a person recognizes that his happiness is dependent on all other creatures’ welfare. Without this basic understanding, the individual sinks into poor motivation and weaknesses.”

Ura has taught “The Economics of Happiness” at Schumacher College.

In 2015, the GNH Centre published excerpts from a speech by Satish Kumar, an activist from neighboring India and editor of Resurgence & Ecologist magazine, at Bhutan’s Royal Institute of Management. “Buddhist economy can challenge the economy of the world because Buddhism believes in interdependence and we cannot manage economy without understanding the ecology,” Kumar was quoted as saying. “Nature is not there as our slave, we need to take with gratitude and humility from it.”

Bhutan’s Princess Kezang Choden Wangchuck is the president of the GNH Centre. Dr Tho Ha Vinh, a Buddhist teacher from the Tradition of Vietnamese Zen Buddhism, is its programme director. Kumar is part of its advisory council. 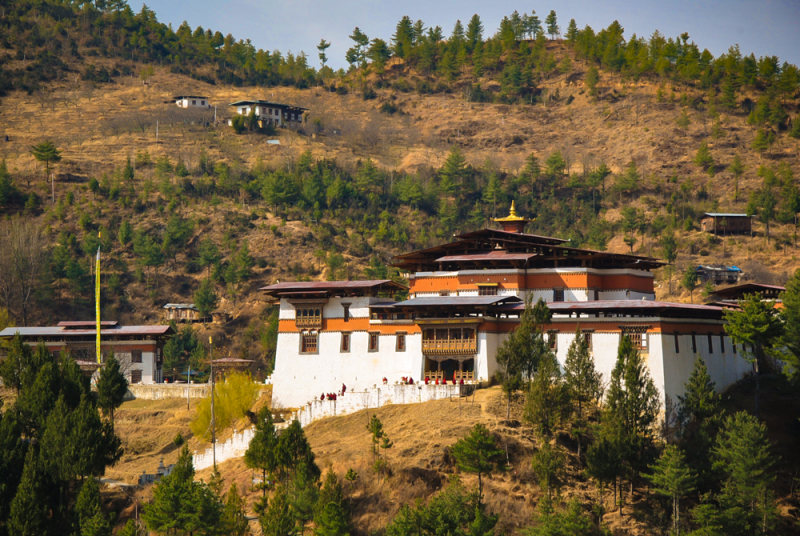 A Buddhist monastery near Thimphu, the national capital of Bhutan (© 2016 Vishal Arora).

Schumacher introduced the term “Buddhist economics” in 1955, when he travelled to Burma, a Theravada-majority Buddhist country now officially known as Myanmar, as an economic consultant for then Prime Minister U Nu.

In his 1973 book, Small is Beautiful: Economics as if People Mattered, Schumacher made a case for Buddhist economics, arguing, “‘Right Livelihood’ is one of the requirements of the Buddha’s Noble Eightfold Path. It is clear, therefore, that there must be such a thing as Buddhist economics.” He also quoted a 1954 document of the then Economic and Social Board of the Government of the Union Burma as stating, “The New Burma (after the independence from British rule) sees no conflict between religious values and economic progress. Spiritual health and material well-being are not enemies: they are natural allies.”

The economist dealt with assumptions that distinguish modern economics from Buddhist economics.

For Buddhist economics, he continued, the function of work is at least threefold: to give man a chance to utilize and develop his faculties, to enable him to overcome his ego-centeredness by joining with other people in a common task, and to bring forth the goods and services needed for a becoming existence. Keeping that in mind, he argues, “to organize work in such a manner that it becomes meaningless, boring, stultifying, or nerve-racking for the worker would be little short of criminal; it would indicate a greater concern with goods than with people, an evil lack of compassion and a soul-destroying degree of attachment to the most primitive side of this worldly existence.”

He added: “Equally, to strive for leisure as an alternative to work would be considered a complete misunderstanding of one of the basic truths of human existence, namely that work and leisure are complementary parts of the same living process and cannot be separated without destroying the joy of work and the bliss of leisure.”

Schumacher also pointed out that modern economics presumably equates wellbeing with consumption. Buddhist economics, “would consider this approach excessively irrational: since consumption is merely a means to human well-being, the aim should be to obtain the maximum of well-being with the minimum of consumption.”

Schumacher then argued that modern economics emphasizes production of resources at the cheapest price without distinguishing between renewable and non-renewable materials. From a Buddhist point of view, “non-renewable goods must be used only if they are indispensable, and then only with the greatest care and the most meticulous concern for conservation.”

This Buddhist philosophy is clearly reflected in GNH, which though uses a universally relevant term “happiness.” Some renowned economists, including the Nobel Laureate Joseph E. Stiglitz and the Columbia economist Jeffrey D. Sachs have  backed Bhutan’s proposal to make “happiness” a yardstick to measure economic progress.

However, Bhutan’s pitch has led to little or no debate over how this Buddhism-based idea of happiness as a state policy will play out in diverse political contexts. For example, ideologies that underline individual rights, minimum government control, separation of church and state, or secularism in the Western sense of the term, might clash with the state-people relations the implementation of Buddhist economics, or GNH, involves.

Vishal Arora is a New Delhi, India-based journalist, photojournalist and video journalist, who travels for stories on politics, culture, religion, foreign affairs and human rights, primarily but not exclusively in South and Southeast Asia. His work has been published in the Guardian, the Washington Post, The Wall Street Journal, Al Jazeera, the Huffington Post, USA Today, World Politics Review, Nikkei Asian Review, Bangkok Post, The Diplomat, Religion News Service, and many other outlets in the U.S., the U.K., Japan, Thailand and India. He is formerly the features editor of the Caravan Monthly, India’s first and only narrative journal of politics and culture. He has also worked as an editor with Indo-Asian News Service, India’s largest private news agency. He can be contacted at vishal@vishalarora.org.